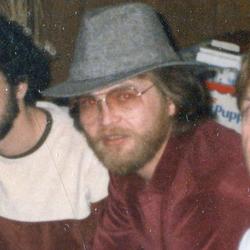 In 1986, I was studying aerospace engineering at the University of Wisconsin and my senior project was sponsored by a NASA educational grant. We were to design a Mars habitat capable of sustaining 10-14 people indefinitely. From a class of thirty, I took it upon myself to build a model of our design using a clear plastic dome from a large terrarium, some cardboard and paint.  I was privileged to be one of five classmates to go to Coco Beach at the end of the semester and give NASA a presentation on our work. There were about twenty other universities participating in the program. It is one of the high points of my college days. The only thing to mar the experience was the Challenger disaster the January before our little conference. The Cape was almost deserted and the mood lousy. Shit happens.

I went on to work on many DARPA and military projects as an aerospace engineer and later in the oil logging industry for Halliburton and other drilling companies. Space and Science will be a part of me until the day I die.

I authored the science fiction series Evolution's Child, a trilogy about the Republic of Luna, the first country to declare its independence from Earth. Book 1, Earthman introduces Lazarus Sheffield and follows along with his defection from the North American Federation. Lazarus left behind all possessions and family to warn the Republic of what was coming.  Book 2, Lunarian introduces Temple Dugan and the other warriors of Quan Kiai, and the fight is joined in earnest.  Book 3, Thread opens up the complexities of Magi, the god-like AI that oversees and runs the complex technology needed for humans to live in space. You can purchase these books separately or in one compiled binding Evolution's Child - Shadow War. I am working on a fourth book in the series. Evolution's Child - Earthborn, is in the works.

My non-fiction book, Out of the Cradle, is a compilation of the numerous environmental concerns facing today's world with a special focus on how and where humanity should get our electricity.

Just for fun, I wrote a western novel, Bad Day on the Verde. Warning though, it gets a little graphic.